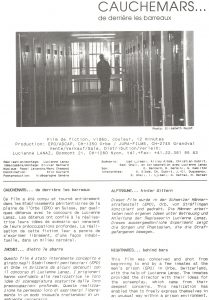 This film was conceived and shot from beginning to end by a few inmates at the men’s prison (EPO) in Orbe, Switzerland, with the help of Lucienne Lanaz. The inmates provided the director with their ideas for the screenplay, which came from their deepest concerns. This realization has enabled them to freely express themselves in an unusual way within a prison environment.