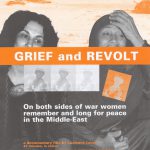 GRIEF AND REVOLT
Middle-East: On both sides of war women remember and long for peace

Flooded by information on the Middle East, we tend to assume that we are well informed. Yet, most of the time this information barely scratches the surface, let alone addresses the core of people’s lives.

Setting aside spectacular headlines, this film aims to dig deeper by having us hear the voices and see the faces of women whom history has pitted against one another – women who have each lost someone dear to them. In their own words, three Jewish and three Arab women bare witness to their lives and the fact of their beloved who continue to live in their dreams. They testify to archaic traditions that crush widows. Whatever their religious or social origins, the pain of these women “in enemy camps” is the same and is not erased by time regardless of appearances.

Enemy women maybe yet ready to extend a hand so that “peace may finally be achieved.”