Documentary by Julie Pozner about the swiss director Lucienne Lanaz.

https://vimeo.com/147226843
“I wanted to have her point of view about happiness, now that she is also 70. She did the same thing with her first documentary “Le Bonheur à septante ans” (Happiness at 70 years old) with her mother 40 years ago”

The Prize for Arts, Letters and Sciences 2017 of the Bernese Jura Council is awarded to Mrs Lucienne Lanaz as a reward for her commitment, the quality of her activities and the high level of her services. (Media)

With “CHILHOOD -A New Life in Les Petites Familles”, Lucienne Lanaz received one of 12 awards from the foundation “Creativity in the Third Age“. 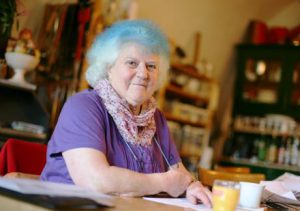 JURA-FILMS is an independent film production house, founded in 1974 and headquartered in Grandval, in the Bernese Jura, Switzerland. JURA-FILMS produces, sells and distributes primarily documentaries made by Lucienne Lanaz itself creator and director of the company.

This site recounts Lucienne Lanaz’s career: self-made Swiss filmmaker and producer, a model of persistence, independence and commitment. Her talent, sensibility and resourcefulness are expressed in subjects and people – often unusual or rarely discussed “because these things are not to be talked about”.
Nothing in the filmmaker’s education or training pointed to the future profession, which took complete hold of her. Lucienne Lanaz is the incarnation of awareness, simply through images straight from the heart without didacticism. To find more and satisfy your curiosity, click on Biography Lucienne Lanaz.